The project was born from the idea of creating a bottle that would represent the “Sicily” of a fine oil, through one of the most famous “symbols” of Sicily.

The project was born from the idea of creating a bottle that represented the “Sicily” oil, to be offered to gift shops, gourmet shops, Sicilian specialties both in Italy and abroad.

The idea of reproducing one of the most famous “symbols” of Sicily is to provide a handcrafted object combined with one of the Sicilian oils, to leave to the consumer a memory of this land and an object to keep even after the content is finished.

The legend of the “Moro” (Arabic) head dates back to the 11th century, when the Mori’s invaded Sicily and became part of the population, so much so that it blended perfectly with the Sicilian population. The history of this vase will be included in the label of the bottle, also to provide the consumer with all the details of the origin of this vase which is found throughout Sicily.

The bottle is made of heavy glass from a mold made by a registrered drawing, on one side the drawing of the female face, on the other the drawing of the male face, it is made of dark glass or painted in white, possibly decorated in some details (the mouth, eyes, necklace, etc.), to make different versions of the bottle to the retailer. The bottle design was registreded to the Catania Chamber of Commerce to ensure the originality of the container.

The content is a PGI Sicily Extra Virgin Olive Oil, in the case of the dark glass color package (NERA) and Dop Monte ETNA in the satin white one.

Both products are part of Frantoio Romano Vincenzo’s “PREMIUM” line for this package that will be offered to specialized shops, Duty Free, delicatessen shops, Restaurants, department stores, food stores. 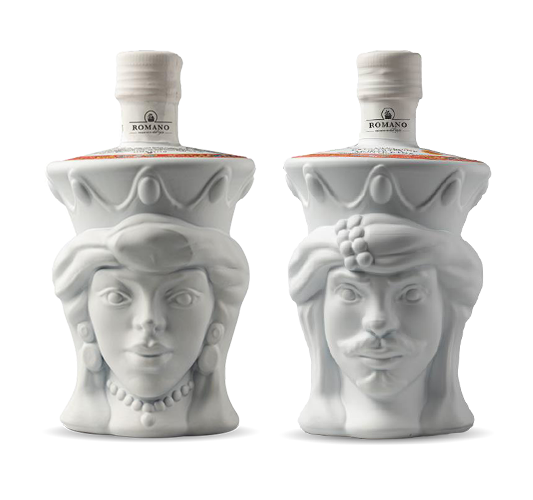 area of production: in slope of Mount Etna;

pressing method: continous cold extraction in the same day after the harvest

taste: with notes of bitter and spicy with after taste of tomato flavor 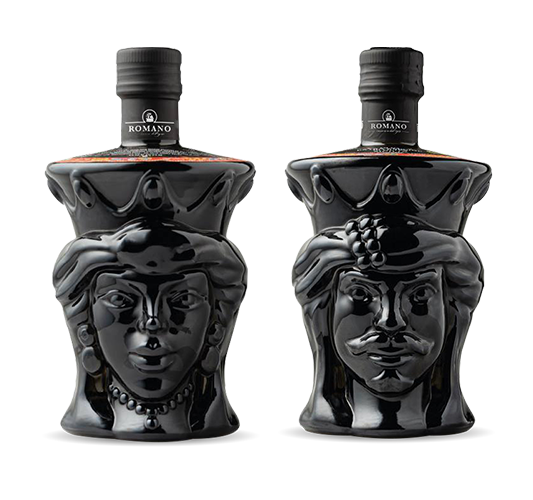 area of production: the slopes of a Mount Etna and Simeto Valley;

pressing method: continous cold extraction in the same day after the harvest

smell: medium fruity with hints of grass and green tomato;

taste: with notes of bitter and persistent spicy;